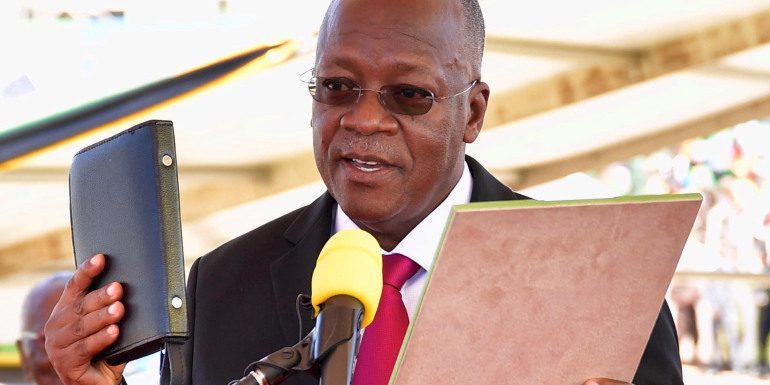 Africa mourns the death of His Excellency John Pombe Joseph Magufuli who has been the fifth President of the United Republic of Tanzania from 2015 until his death on 17th March 2021. He was born on 29th October 1959 at Chato, north-west Tanzania. He started his education at Chato Primary School from 1967 till 1974 and went to Katoke Seminary in Biharamulo for his secondary education from 1975 to 1977 before relocating to Lake Secondary school in 1977. He later joined Mkwawa High School for his Advanced level studies in 1979. That same year he joined Mkwawa College of Education for a Diploma in Education Science majoring in Chemistry, Mathematics, and Education. Magufuli got his Bachelor of Science in Education degree, majoring in Chemistry and Mathematics as teaching subjects from the University of Dar es Salaam in 1988. He as well earned his master’s, and doctorate degrees in Chemistry from the University of Dar es Salaam in 1994 and 2009 respectively. In late 2019, he was awarded an honorary doctorate by the University of Dodoma for improving the economy of the country. He was also once a teacher and worked in Mwanza.

From 1995 to 2000, he was a Member of Parliament and also served on the Cabinet of Tanzania as Second-in-command Minister of Works from 1995 to 2000. He then held various ministerial positions which included; Minister of Works, Transport and Communications from 2000 to 2005, Minister of Lands and Human Settlement from 2006 to 2008, Minister of Livestock and Fisheries from 2008 to 2010, and as Minister of Works for a second time from 2010 to 2015. His bullish leadership style and fight against graft in the road construction industry was endearing for Tanzanians, who later nicknamed him “the bulldozer.”

He was then elected as a chairperson of the Southern African Development Community between 2019 and 2020.

Running as the candidate of Chama Cha Mapinduzi (CCM), the country’s dominant party, Magufuli won the October 2015 presidential election and was sworn in on 5 November 2015; he was re-elected in November 2020. He operated on a platform of plummeting government fraud and expenditure while also capitalizing in Tanzania’s industries, but was suspected of having had progressively oppressive inclinations seen in limitations on freedom of speech and a clampdown on members of the political opposition.

He has been known as the only East African president who commenced actions to reduce government expenditure for the good of the Tanzanians and their economy by reducing the number of ministers from 50 to 19, reducing the budget spent on public festivities like the celebration of Independence Day, World AIDS day,  barring pointless foreign travel by government officials, using cheaper vehicles and board rooms for transport and meetings respectively, shrinking the delegation for a tour of the Commonwealth from 50 people to 4, and discouraging lavish events and parties by public institutions (such as cutting the budget of a state dinner inaugurating the new parliament session). Magufuli reduced his own salary from US$15,000 to US$4,000 per month.

Magufuli suspended the country’s Independence Day festivities for 2015, in favor of a national cleanup campaign to help reduce the spread of cholera where he personally participated in the cleanup efforts, having stated that it was “so shameful that we are spending huge amounts of money to celebrate 54 years of independence when our people are dying of cholera”. The cost savings were to be invested towards improving hospitals and sanitation in the country.

Magufuli during his presidency is commendable for his pan-Africanism that has been cited throughout his reign. He has tremendously fought for the economic development of Tanzania and encouraged industrial development in his country.  In March 2017, Tanzania banned the export of unprocessed ores, in an effort to encourage domestic smelting. In January 2018, Magufuli issued a directive ordering the suspension of registration for foreign merchant ships, following recent incidents surrounding the seizure of overseas shipments of illegal goods (particularly drugs and weapons) being transported under the flag. During his tenure, the law governing the grant of mining contracts was amended to granting Tanzania the right to renegotiate or terminate contracts in the event of proven fraud. The new legislation also removes the right of mining companies to resort to international arbitration. Tanzania is one of the countries with the highest economic growth rates on the African continent (5.8% in 2018 and an estimated 6% for 2019 according to the IMF).

At the time of his death, the Tanzanian government had embarked on a vast program of infrastructure development, particularly rail infrastructure. The small fishing port of Bagamoyo, to which $10 billion of investment has been allocated, is expected to become the largest port in Africa by 2030.

Africa has lost a pan- Africanist, the East African Community has lost a regional integrator and visionary leader and Uganda has lost an ally and colleague.

May his soul rest in eternal peace and May the Lord strengthen the family of His Excellency Magufuli citizens of the Republic of Tanzania during this trial moment.